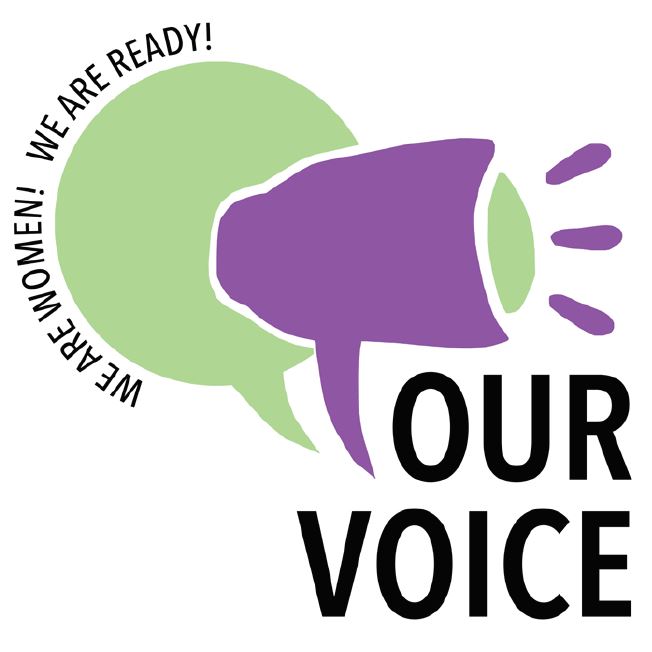 We are stronger when we work together.

Our Voice is a joint advocacy campaign working to increase the representation and effective participation of women, with a broad commitment to gender equality and women’s rights, in decision-making at all local levels across Asia and the Pacific.

Launched on International Women’s Day in 2018, the Our Voice campaign is led by partners of IWDA’s Women’s Action for Voice and Empowerment (WAVE) program.

This International Women’s Day, join Our Voice and join the call to recognise women’s leadership at the local level. 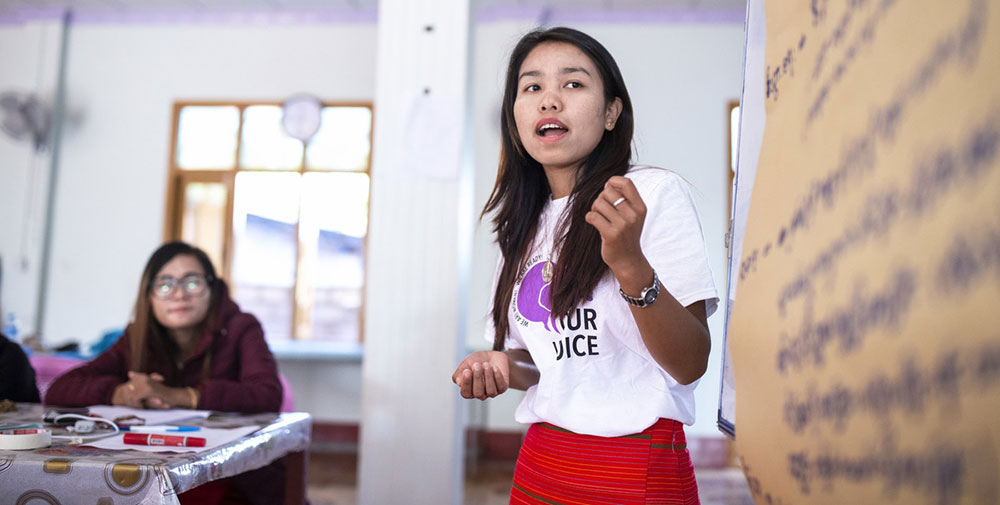 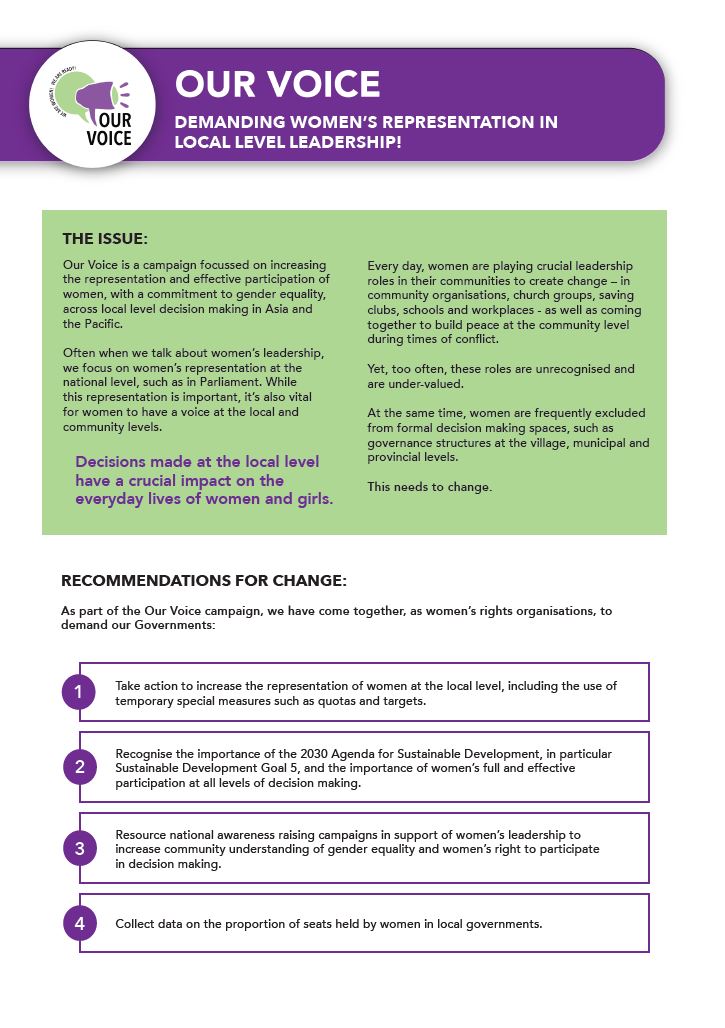 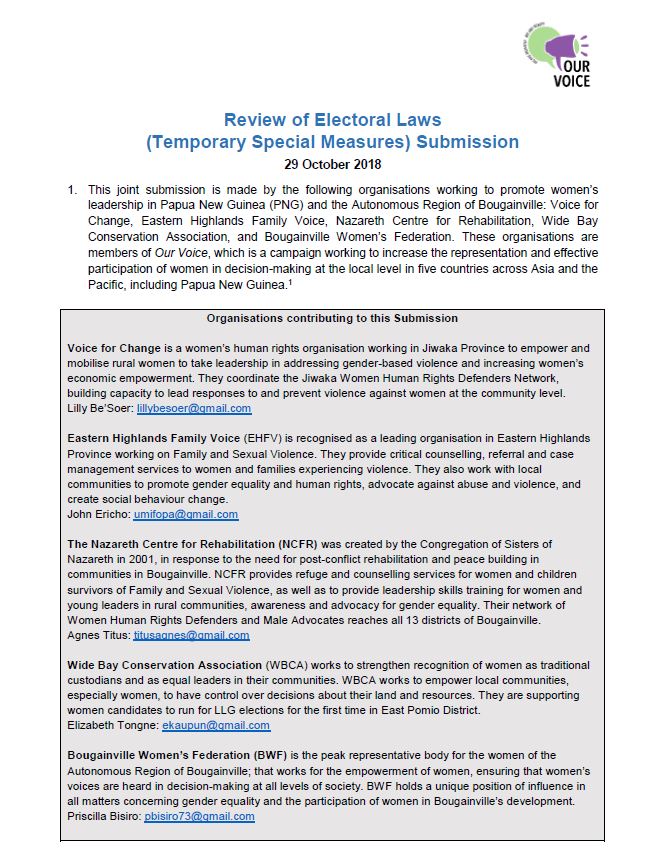 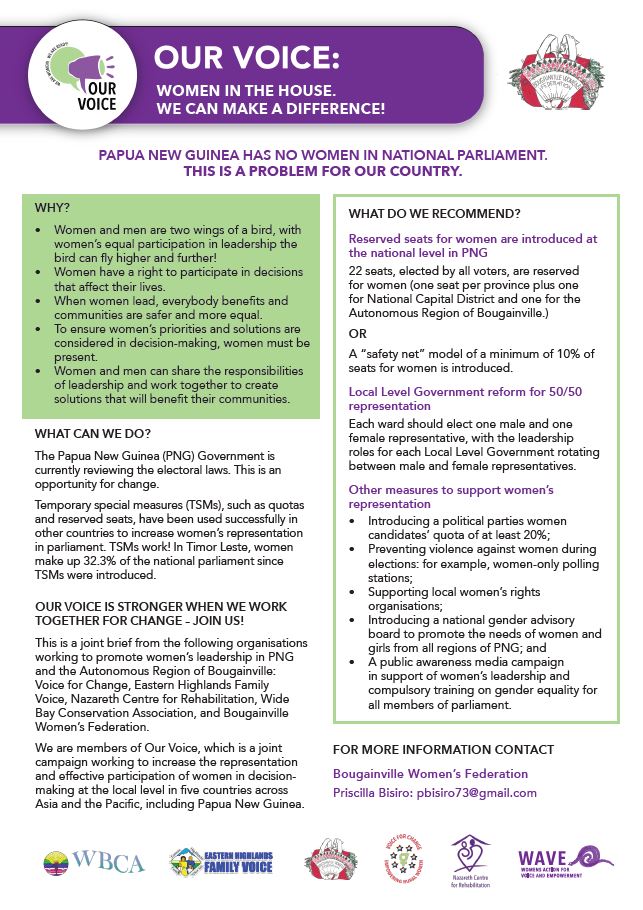 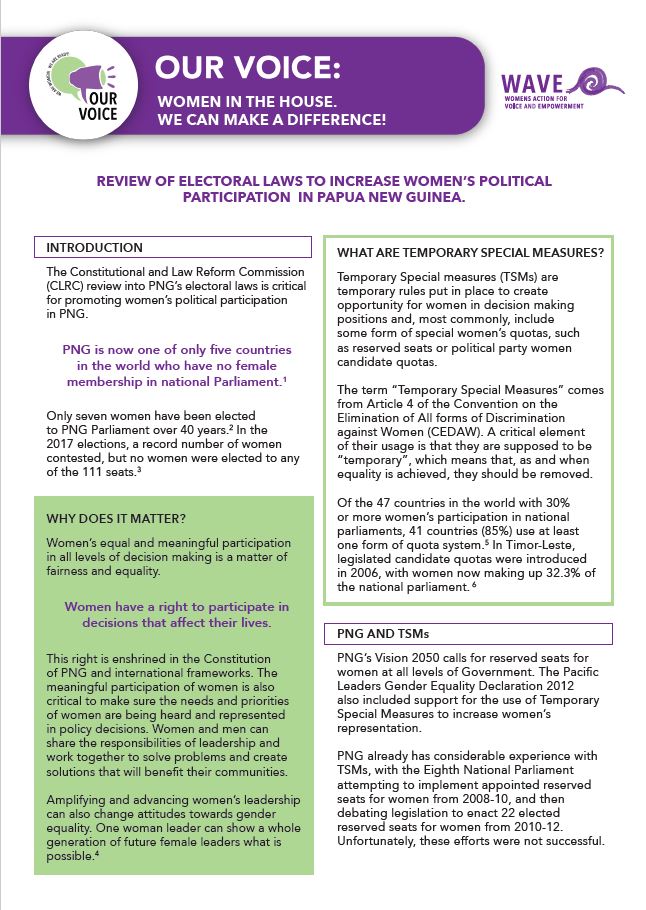 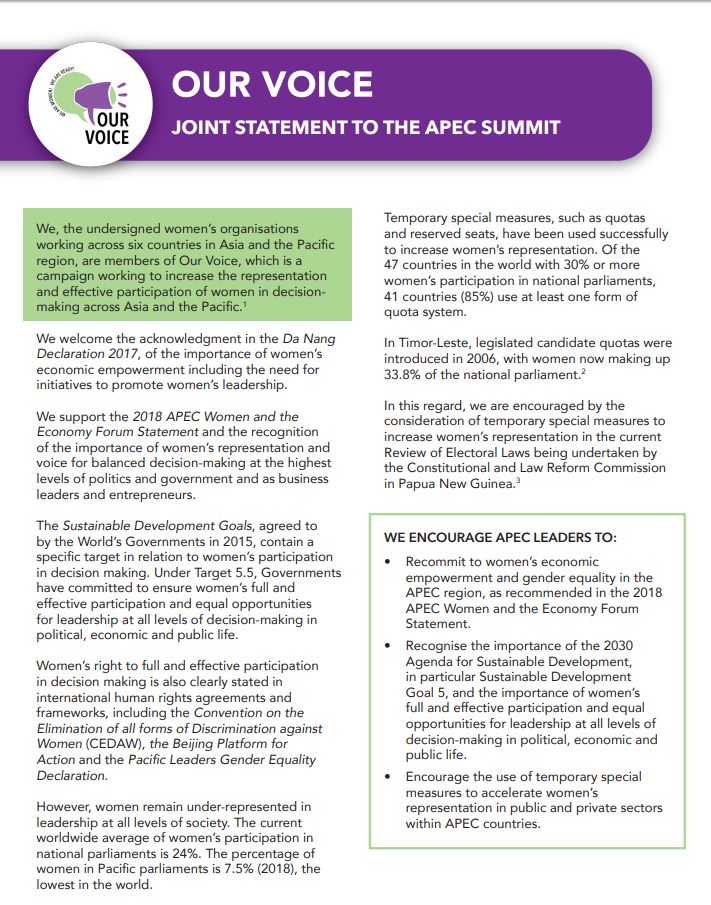 Why does women’s leadership at the local level matter?

Often when we talk about women’s leadership, it’s to discuss women’s representation at the national level, such as in parliaments. While this representation is important, it’s also vital for women to have a voice at the local and community levels.

Decisions made at the local level, including state, provincial district and village levels, have a crucial impact on the everyday lives of women and girls.

“You can’t only change the government system you have to change the whole society.”

How can Our Voice create change?

Change is possible, but requires political commitment. The work of WAVE partners in Solomon Islands, Papua New Guinea, Myanmar, Cambodia and Timor Leste, together with global and regional evidence, identifies a number of key areas which can be prioritised to support women leaders at all levels.

Supporting women’s leadership requires tackling discriminatory social norms including restrictions on women’s freedom of movement, unpaid caring responsibilities, acceptance of violence against women and other discriminatory perceptions that women are not suitable leaders. This requires a long-term approach that involves working with women and men of all ages. Male leaders can play an important role in supporting women’s leadership including by challenging gender inequality in their communities.

Temporary Special Measures (TSMs) are temporary rules put in place to create opportunity for women in decision making positions. These can include mechanisms such as quotas, reserved seats and targets.

Increasing the numbers of women can positively impact attitudes on the value of women’s leadership. Research has also shown that unless women make up at least one quarter to one third of a body’s membership, their meaningful participation can be limited.

Quotas alone do not guarantee increased influence for women or increased focus on women’s priorities. It is crucial that TSMs form part of a broader, comprehensive approach.

Women’s rights organisations play a key role in supporting women to develop the skills, knowledge, networks and confidence to take on leadership roles and to meaningfully participate in and influence leadership spaces.

They provide a way to reach marginalised women, including women with disabilities, rural, indigenous, elderly, ethnic minority and widowed women. Local women’s organisations also understand the challenges facing women, which shape their leadership opportunities and can provide support to women throughout their leadership journeys.

It is important that women’s participation and influence at local and community levels is also prioritised for collecting data, evidence of what works, and promoting the importance of women’s leadership. This must also include support for young women’s leadership in both formal and informal roles.

The experiences of WAVE partners demonstrate the importance of providing support to women throughout the entire election cycle – that is before, during and after elections. This support must include working with political parties to reform party policies, procedures and structures such as introducing gender quotas for candidate selection.

Once elected, female parliamentarians need continued support to navigate male-dominated spaces and to effectively advocate for change in support of women’s rights. Support models that have proved effective include mentoring, coaching and women’s parliamentary caucuses

This pamphlet provides an introduction to the issue of women’s participation and influence in local decision making – what we know about the issue and what needs to change!