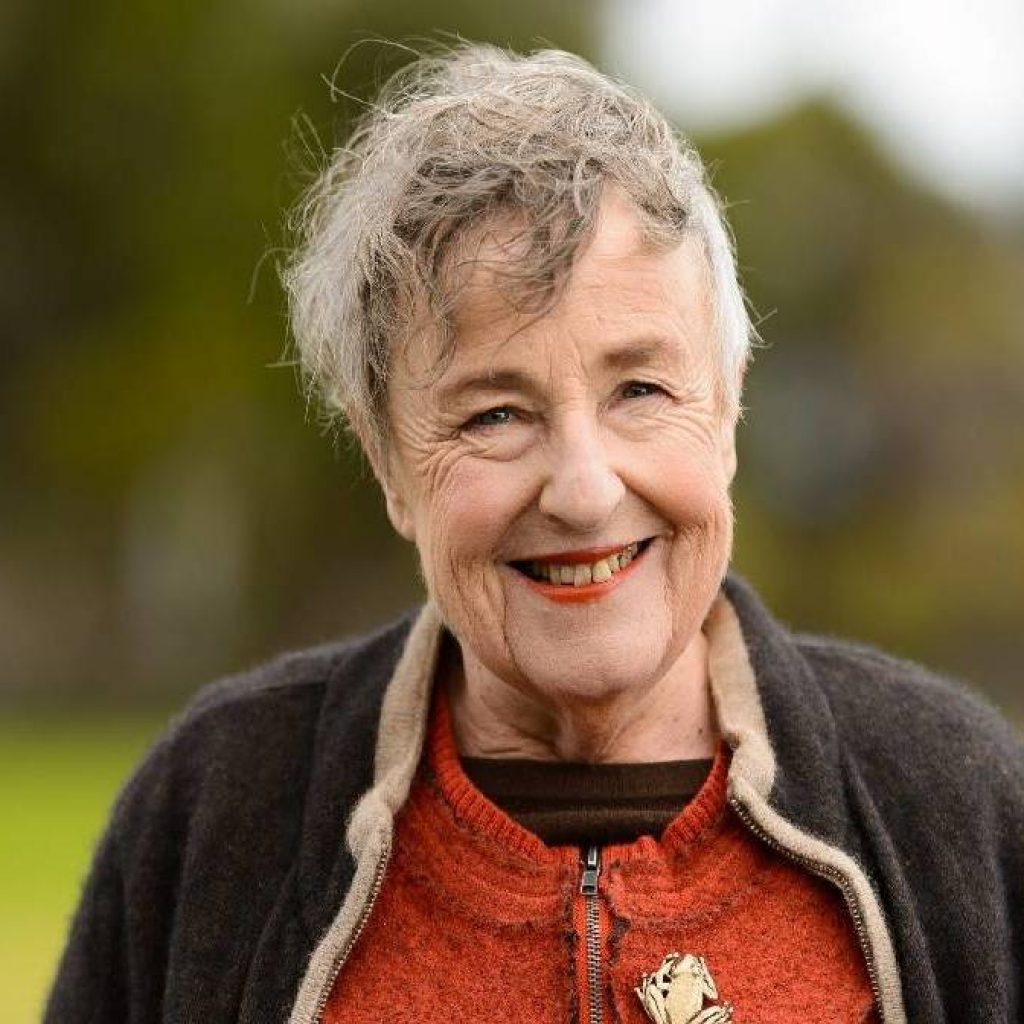 Feminists and environmentalists alike are mourning the loss and celebrating the life and legacy of Dr Deb Foskey. 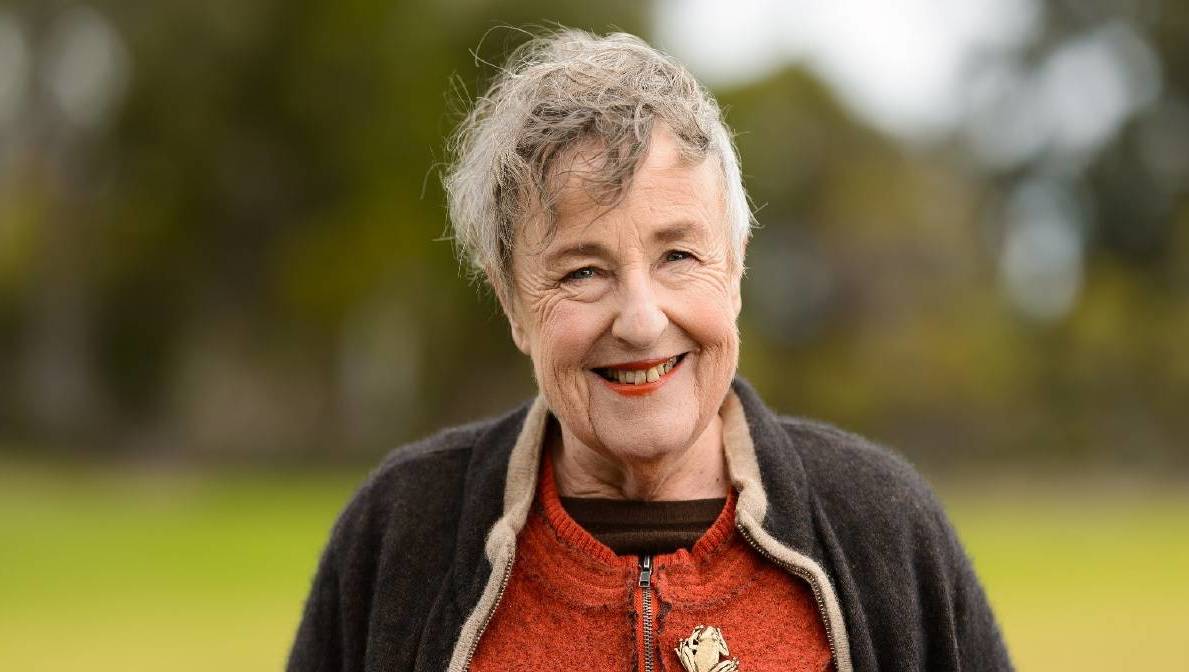 Feminists and environmentalists alike are mourning the loss and celebrating the life and legacy of Dr Deb Foskey who died on 1 May 2020 at 70 years of age, after a lifetime of contributing and campaigning.

A former IWDA staff member, Deb is perhaps most well-known as a Greens member of the ACT Legislative Assembly from 2004-2008. In advising of her death, Shane Rattenbury, ACT Greens leader and Member for Kurrajong and Caroline Le Couteur MLA, Member for Murrumbidgee, highlighted Deb’s “fierce intellect” and incredible focus on “working to improve our world in a holistic way”:

“Dr Foskey committed her life to sustainability, compassion and community. In the 1970s and ‘80s she was a forest campaigner in East Gippsland, successfully working to protect precious forests in the area. She was a school teacher, and moved to Canberra with her children in the 1980s.  She completed a Masters in Human Ecology and a PhD in Political Science from ANU, focusing on population issues and analysing humanitarian ways to achieve a lower ecological footprint.

Dr Foskey worked incredibly hard on issues such as sustainability, and triple bottom line analysis – which has been a standard process when evaluating major ACT Government decisions through the cabinet process for the past 8 years.”

Deb Foskey’s contribution as a member of the ACT Legislative Assembly was remembered in a condolence motion at on 7 May. It’s a great tribute.

Prior to her election to parliament, Deb worked with IWDA as its part-time Canberra representative in the 1990s and early 2000s. You can see an example of Deb’s work here, an article from 2004 entitled ‘Whose World? The Bank on Gender’, part of special issue of the Development Bulletin (no. 64) on Gender and Development: bridging policy and practice. 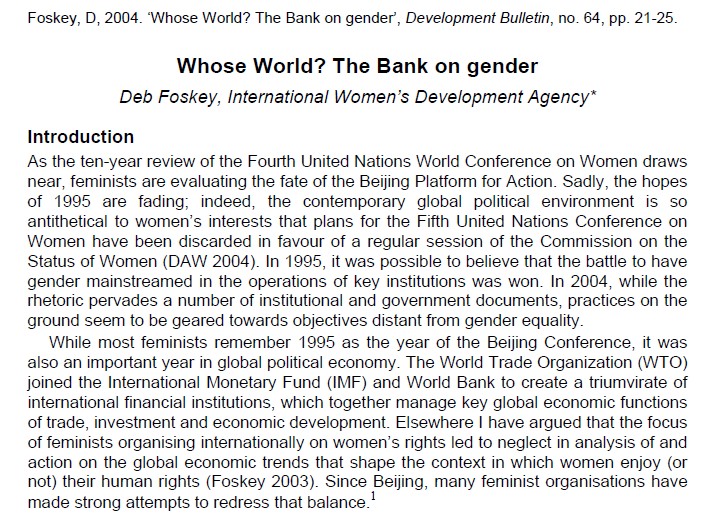 Perhaps the best way to remember Deb’s contribution and legacy is through the words of women who worked with and alongside her.

Sue Finucane, Director of the Gender Equality and Inclusion Hub, and former IWDA Program Manager, worked with Deb in the 1990s. “I recall the heady days when at IWDA and Deb representing IWDA in our Canberra chapter. It really was a thrilling time to be involved in global women’s activism and Deb really lived the values of think globally and act locally. Ahead of her time in many respects making and living the links between gender, women’s rights (or lack thereof) and climate care.”

Avega Bishop, gender specialist and former IWDA Executive Director, remembers “her activism, and her skills in deconstructing, analysing and framing issues. In the time I knew her, Deb’s contributions to IWDA were invaluable – at a time she was studying and raising her daughters as well.”

Di Kilsby, gender consultant and former IWDA program manager, remembers Deb well: “What an amazing woman who made an enormous contribution to all the movements she was part of. IWDA’s presence in the ACT was vibrant at that time, with all the energy and intellect Deb brought to it. She was truly inspiring. She went through so much in her life but she leaves a huge legacy.”

Janet Hunt, former IWDA Executive Director, now Associate Professor at the Centre For Aboriginal Economic Policy Research and co-director of the ANU Individual Deprivation Measure team, knew Deb well over many years, and highlights Deb’s strength, persistence and “huge contribution… She was a very courageous person and a terrific activist and community worker.”

Elizabeth Cox, Pacific gender specialist and former Regional Programme Director of UN Women in the Pacific, remembers the significant contribution that Deb made through her work alongside other IWDA colleagues: “We are all grateful for the old guard gang at IWDA, who really made a difference for those of us in the field.”

Susan Harris Rimmer, a current IWDA Board member and Associate Professor at the Griffith University Law School, remembers Deb as “a brave and compassionate advocate for the environment.”

Christina Ryan, CEO and Founder of the Disability Leadership Institute remembers “a fantastic community activist and a great human,” highlighting her work with the ACT Council of Social Services (ACOSS) in support of long term residents of the Narrabundah caravan park, and as an original part of Women In Black in Canberra. Deb helped ensure that when the private owner of the caravan park sold the land, the ACT Government stepped up to organise a land swap to preserve the homes of residents, some of whom had lived at the caravan park for over 20 years. The park remains home to more than 100 people and part of the affordable housing options available in the ACT.

Friend and Greens Senator in the Federal Parliament, Janet Rice, plans an adjournment speech in the Senate on 12 May to speak about Deb’s contributions: “Deb’s passing is such a loss. Such an inspiring life. She was an amazing feisty campaigner to the very end.”

Bob Brown’s words on 1 May are almost a fitting way to remember Deb’s legacy: “Vale Deb Foskey. Earth defender, compassionista, who leaves this world the better for her life and ideals. A day after Greenpeace’s great anti-SLAAP writ win v. loggers in US courts, we raise a glass to Oz’s only anti-SLAAP act, in the ACT, thanks to Greens MP Deb”.  Except that he missed one of the central drivers of her life: Feminista.

Vale Deb Foskey. Your life and work is a testament to the importance of feminism, activism, persistence, and the impact one individual can have when combining intelligence and compassion with a drive for lasting impact.  Your vision was not for a bigger slice of a poisoned pie but for a truly feminist future. Your legacy is helping to bring that day closer.

IWDA sends its deep condolences to Deb’s daughters Sam and Eleni and to Deb’s friends and colleagues. IWDA is deeply grateful to family and friends who have generously asked for donations to IWDA in her honour.

A Memorial service will be organised later in Gippsland, where Deb lived in recent years, once COVID-19 restrictions ease and allow a wider celebration of her life.