Bringing gender equality out of the shadows in Myanmar

In the context of the national election in Myanmar (also known as Burma), women’s civil society organisations are preparing to hold the Government accountable to its international human rights obligations. 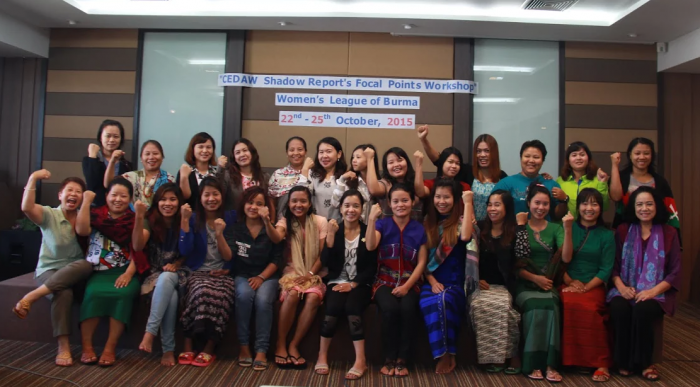 In the context of the national election in Myanmar (also known as Burma), women’s civil society organisations are preparing to hold the Government accountable to its international human rights obligations.

It has been 18 years since Myanmar formally signed on to the Convention on the Elimination of All Forms of Discrimination Against Women (CEDAW). CEDAW is the closest we have to an international bill of rights for women. It defines discrimination against women and works to articulate and advocate for women’s rights and gender equality on a national and international level.

Following Myanmar’s recent transition to a quasi-civilian government after 50 years of military rule, conditions have slowly started to improve. But women’s rights violations in Myanmar are still widespread. Sexual violence in conflict, trafficking, domestic violence and discrimination remain common experiences for women and girls. It is imperative that Myanmar now takes active steps to uphold its commitments under CEDAW.

In January 2015, the Government of Myanmar submitted a progress report to the CEDAW Committee on what they have done to uphold their commitment. Yet reporting from officials is only one part of measurement. Prominent non-government organisations in the women’s rights sphere now have the opportunity to respond and provide evidence on the current state of women’s rights in Myanmar.

Women’s League of Burma is part of a coalition of women’s organisations preparing shadow reports examining Myanmar’s recent CEDAW submission. These shadow reports will give an alternative voice to women’s rights in Myanmar based on the personal experiences of the women they work alongside every day.

“Our experience with the CEDAW report process in 2008 showed us that if we provide concrete evidence to the CEDAW Committee we can have an impact on the Committee’s Concluding Comments. The CEDAW mechanism provides us with the best opportunity to ensure the international community puts pressure on the Burmese government,” said Julia Marip, General Secretary of Women’s League of Burma.

To prepare for the shadow report, Women’s League of Burma brought together 25 women representing their 13 member organisations for a four day workshop in Chiang Mai, Thailand. Supported by IWDA and Foundation for a Just Society, these women analysed current rights abuses and participated in role play exercises to practice articulating their concerns to the CEDAW Committee.

The CEDAW Committee will assess the Government of Myanmar’s report at its 64th session in Geneva on 22 July 2016, as well as the shadow reports released by Women’s League of Burma and other prominent non-government organisations.

IWDA supports Women’s League of Burma in the essential role they are playing to advocate for women’s rights in Myanmar.