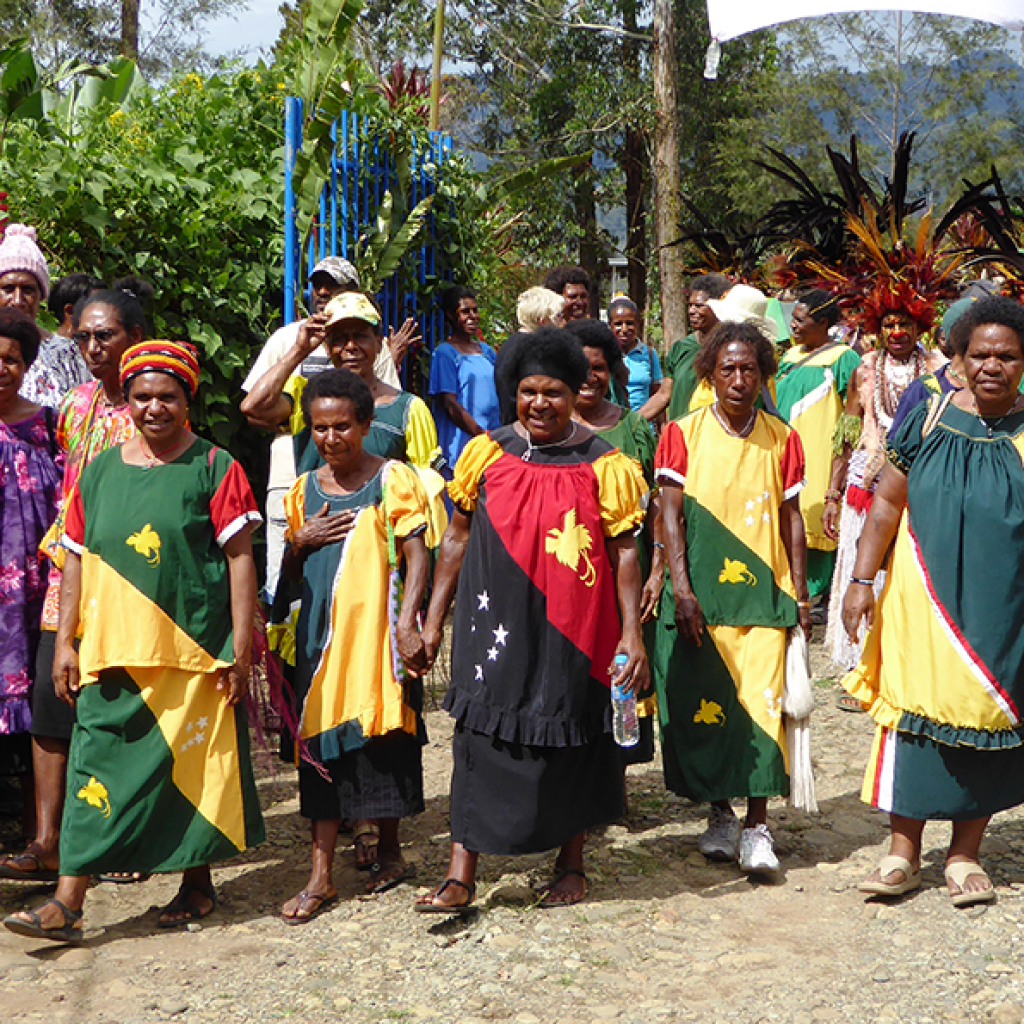 Jiwaka Province, situated in the Highlands of Papua New Guinea, is relatively new. Established in 2012, it is still facing the difficult task of building basic government infrastructure and establishing functioning public services to support their diverse communities, particularly those that are rural and remote. When it comes to women’s safety, services and support mechanisms are still woefully behind or lacking.

Outside of conflict zones, Papua New Guinea is estimated to have one of the highest rates of violence against women on earth. The Australian Federal Police have described Gender based violence (GBV) as a pandemic, with close to 70% of women having experienced violence from their partners or husbands. And the rates for PNG Highlands are considered to be higher than the national average.

IWDA Partner, Voice for Change, is one of the few organisations working in Jiwaka to provide support to women and children, who have experienced violence. They work with local communities, educating women and men, girls and boys about violence and the law. Their Jiwaka Women Human Rights Defenders Network (specially trained women and men) acts as the first point of contact in local communities, they are someone to talk to, and give advice on where and how to seek help. Voice for Change and their Network members also work with Police, local governments and community leaders to challenge violence against women, aiming to increase support for women and prevent further violence.

Solidarity amongst women and organisations who work to prevent Gender based violence, is hugely important for maintaining resilience and building support networks. Coming together to share learnings on things like addressing violence against women and gender based discrimination, economic empowerment and building women’s voice in communities, nurturing activism, working together and engaging young women, is also critical to the acceleration of women’s rights.

Papua New Guinea has a number of forums that bring women together to do exactly this – but they are usually held in big cities and central locations. Often women living in rural provinces like Jiwaka are left out, which means that often issues and concerns of rural women don’t have a voice at broader national and sub-national forums and gatherings.

That is why this year, Voice for Change held the first ever Jiwaka Women’s Forum from October 24 – 27. The forum brought together 117 participants, mostly women activists from Jiwaka and a few representatives from other IWDA partner organisations across Papua New Guinea and Bougainville. After an opening ceremony, where women from different communities wore their traditional dress and celebrated by dancing and singing, the Forum got down to business to discuss issues facing their communities.

Gender based violence, polygamy, sorcery-related violence, harmful traditional practices, gender based discrimination and attitudes, drug and alcohol abuse were noted as barriers to women living safely and freely. Sophie Kilipi, Coordinator of Voice for Change’s GBV Response Team, opened the first day of the Forum with a presentation on collected data and recommendations on how violence can be addressed. Sophie’s message was inspiring:

“Strong political will and more resources are needed to create a safe place for our women! We all need to work together to end violence against women! Our women and girls need to collectively voice this issue to authorities, so they start paying close attention to this issue!”

Women’s leadership and economic empowerment was also a large focus, with young women and mature women working together to come up with plans on how they increase the voice of women in their communities.

With the recent election in Papua New Guinea seeing no women elected, it is more important than ever that women, especially rural women, are given space to build movements and share plans for action. They have a role to play and can be a catalyst for change at community level.

The Forum raised many tough issues, but also gave women a chance to help advocate for real change.

One of the Forum participants, Gertrude Andrias, the Principal of Kingku Technical College of Jiwaka, said:

“Personally, I think this Forum was very important for women of Jiwaka because, firstly, Jiwaka is a new province, and most women suffer domestic violence and they have very limited options for help and they are not heard most of the times. Through the initiative of Voice for Change and IWDA, the women had a chance to come together, we were able to get a lot of information out of this Forum and we had so many sessions. For me new information was about importance of the safe markets. Most of the women who came here have never been to a forum before, they come from rural communities in Jiwaka Province. They will take this information back to their families and communities. And we are looking forward to the change that will be as a result of this Forum.”

“Women of Jiwaka have learnt about their rights. This Forum is very informative and then women are educated, they can advocate and educate other women and girls about their rights. As women, we have our rights, but because of gender bias and violence from men folk, we haven’t been able to fully exercise our rights and perform the potential that we have in us. As Jiwaka is a new province, and we have this Forum here, we, women of Jiwaka, are very proud and honoured to have the first Jiwaka Women’s Forum here!”

“It was an opportunity to learn from each other,” concluded at the end of the Forum Lilly Be’Soer, Director of Voice for Change. “It was a space to share our problems and discuss possible ways of addressing these problems. We now feel much more united and stronger to take our issues forward and to voice them to our Government tomorrow! We have asked all participants and also all women of Jiwaka to join. We will walk towards our Provincial Government’s office to demand the changes that we want.”

The Forum resulted in the Outcome Statement, with all participants marching to Jiwaka Provincial Government on Friday, 27th of October to present their recommendations and requests.

The full statement can be read here.

Thank you to the Government of the Netherlands for supporting the Women’s Action for Voice and Empowerment (WAVE) Program.