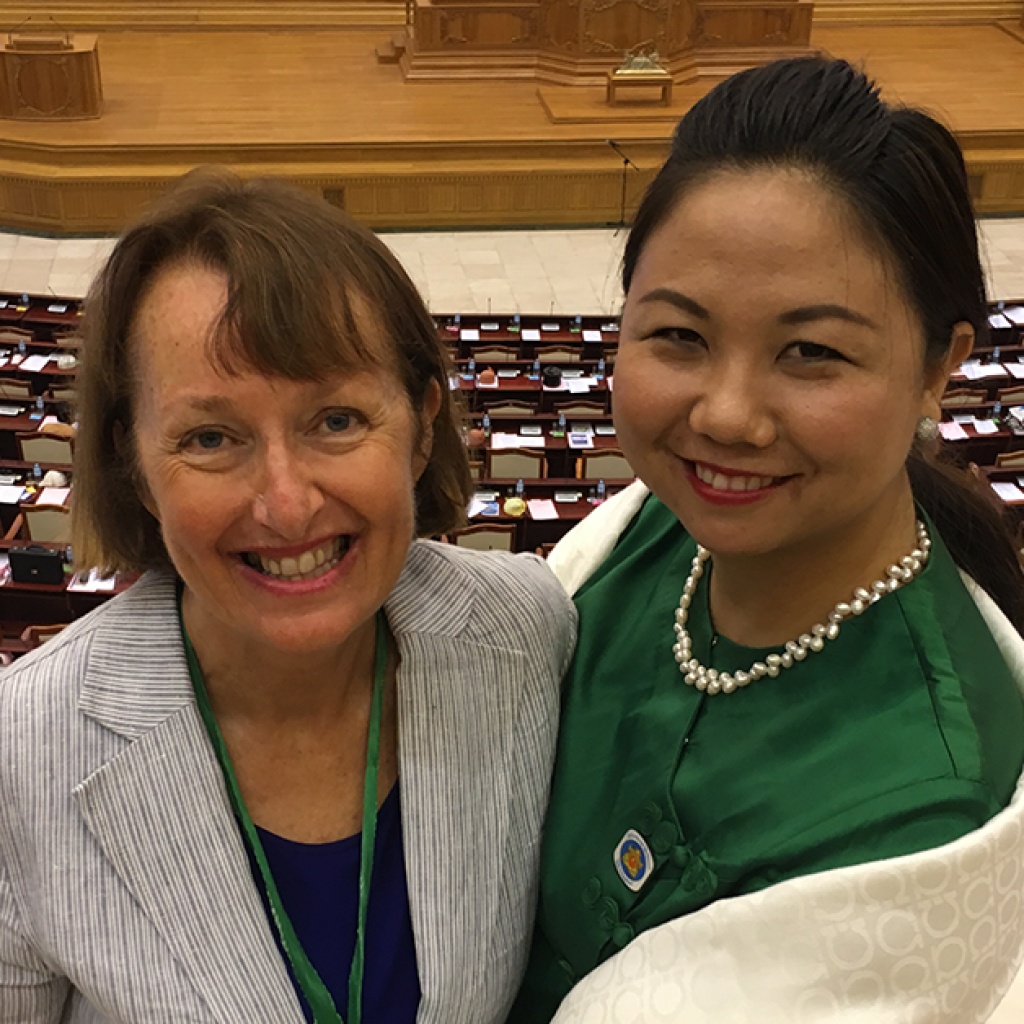 Six newly elected women MPs from Myanmar sit in a room, buzzing with nervous energy as they wait for the six strangers flying to meet them. They’re chatting amongst themselves about what they want to achieve in their careers, who they hope to be matched with, and where they see the relationship going. These women have come from four political parties and six ethnic groups to lead their people. The women on the way to meet them are seasoned current and former Members of Parliament from all over Australia, and they’re there to mentor their newly elected Myanmar sisters. 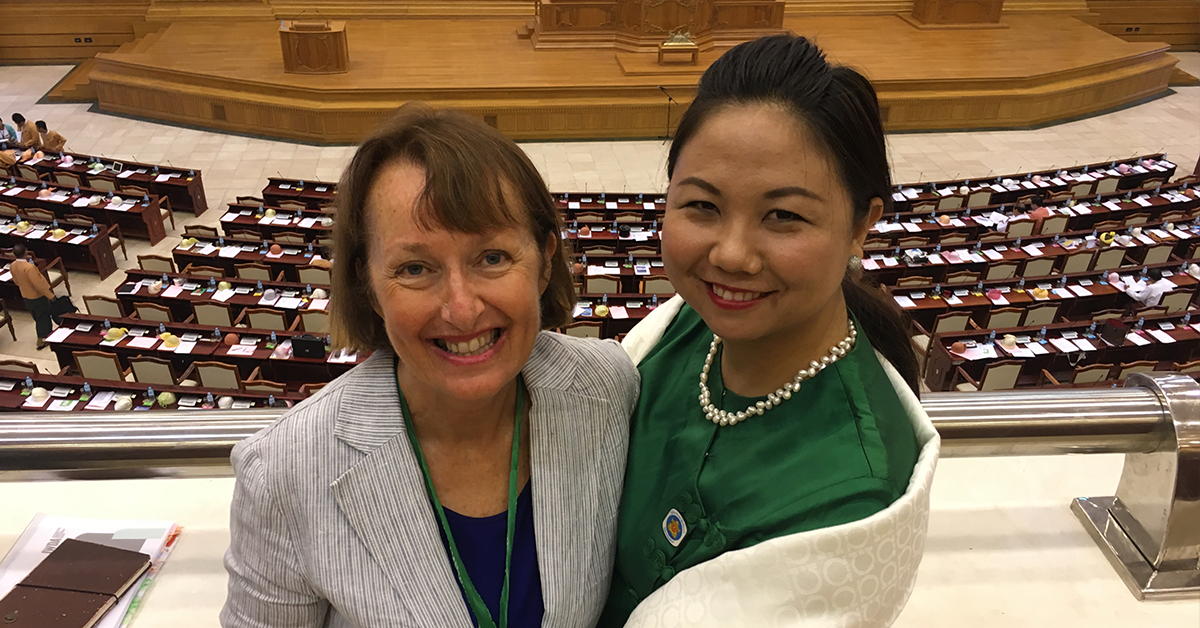 Six newly elected women MPs from Myanmar sit in a room, buzzing with nervous energy as they wait for the six strangers flying to meet them. They’re chatting amongst themselves about what they want to achieve in their careers, who they hope to be matched with, and where they see the relationship going.

It almost sounds like a blind date. But these women have come from four political parties and six ethnic groups to lead their people. The women on the way to meet them are seasoned current and former Members of Parliament from all over Australia, and they’re there to mentor their newly elected Myanmar sisters.

After a landmark victory for Myanmar’s National League of Democracy party in 2015, the number of women in Parliament has doubled. This is amazing, but it’s still only 10.5% of all MPs – out of 657 MPs, only 69 are women. 25% of seats are still held by the military. Across the ethnic diversity of Myanmar, the country remains deeply patriarchal.

Obtaining and holding on to a political position in the face of sexist institutions is hard for women, no matter where they’re from. But getting into the game isn’t enough in itself. These women need support to present and advocate for legislative change that will benefit women in their communities.

These women are forging careers in politics without what most people would consider the basics for a Member of Parliament. Like their male colleagues, they don’t have their own offices. They don’t have staff. They are not provided with laptops. They don’t have a strong system of support.

This is exactly why IWDA has partnered with Akhaya Women, supported by the Netherlands Government, to match these women with mentors who have spent their whole careers dealing with sexism in politics.

Before the Australian MPs arrived, staff were stressed. What if the women all wanted the same mentor? What if nobody clicked? What if their experiment failed?

After their arrival, their concerns were put to rest. When the six mentors enter the room of Myanmar MPs, they are quick to pair off, with no overlap – an organiser’s dream. Lway Nan Moe is one of the Myanmar MPs. She is from Ta’ang National Party, one of the many ethnic minority parties in Myanmar. She felt an instant connection with Judith Graley, a state Labor MP from Victoria. Despite their cultural differences, the two immediately bond over shared stories of overcoming self-doubt and sexism.

Nan Moe says her first foray into Parliament has been hard.

“I have to fight a lot [because of my] gender. When I came inside the Parliament, I thought ‘oh my god, this is a men’s place, it’s not for a woman’…When I spoke for the first time in the parliament, I was very scared to speak, maybe I was wrong, a lot of men were looking at me.”

Judith agrees. Growing up in suburban Australia, her image of a MP didn’t reflect someone like her.

“You fill yourself up with all sort of questions about whether I can do this. There is a little voice in your head all the time saying ‘can I actually do this role?’”

Judith and Nan Moe soon deviate from the topic, talking about their families, friends and hobbies. They have the same laugh – warm, unrestrained and infectious. After their initial introductions, the Myanmar women take their mentors to their favourite places.

For Daw Nan Htwe Thu from the National League for Democracy (NLD), this sense of community is best represented by Uppatasanti Pagoda, her local temple, and her spiritual connection to Buddhism. This is where she chooses to take Penny Wright, a former Senator and co-founder of the South Australian Greens.

Nan Htwe explains, through an interpreter, that she wants to start their relationship at a place of special spiritual significance to her. For Penny, going to a place that has been so crucial to Nan Htwe’s personal growth is an emotional experience.

“At the heart of mentoring is trust and connection. Nan Htwe believes it would bring us good fortune and augur well for our future relationship, which, in her words, would involve ‘opening her heart to me’. I feel touched to have this glimpse of her deep faith and to know that she trusts me to share this special place with her.”

The Myanmar MPs have the knowledge of the law, the skills to do their job, and finally, a seat at the table. The idea of the mentors is to be a sounding board and support them to build the confidence to navigate a male-dominated world in Government. But their individual life experiences came out in more than just their political ambitions.

Ann Sudmalis is a Federal Liberal MP from New South Wales. When she first meets her mentee, Naw Chris Htun (NLD), they are struck by their similar life paths. Both have three children. Neither started their life is politics – Chris Htun was a vet, and Ann was a teacher and small business owner. After becoming well known in their communities, both women wanted to do more, and chose to leave the safety of their established careers to enter politics.

Ann was genuinely excited about the trip, and has a strong connection to the region after volunteering as a teacher in India. She’s had a mentorship relationship before, and knows how beneficial they can be.

“I would love an opportunity later to come over and see the changes in her because I know that if you open the doors for a woman and say “you can do that”, very often the woman will push the door open wider and step right through.”

The next few days are spent visiting Parliament, sharing meals and trading stories. But it’s not all socialising. They discuss strategies on how to engage with their own parties and male colleagues, how to communicate and campaign to their constituencies, and the ways they balance pursuing their passions with their other responsibilities. They talk about self-confidence, partnership, and the importance of networking. They talk about being a woman in what’s still a man’s world.

Many of the women tear up when it comes time to leave, and as the Australian women land back home, emails are exchanged. One mentor cries tears of happiness at receiving hers.

Ann is excited to visit again soon, and see how much Chris Htun is developing in her career. The women are working together to plan how they’ll leverage their connections to push their agendas in parliament.

It’s going to be an uphill battle for these brave women to get laws and policies to protect and advance the rights of women in Parliament. But the mentorship program has given them a valuable new tool in their mission for a more gender equitable Myanmar.