The obstacles to women’s rights in the matrilineal Wide Bay 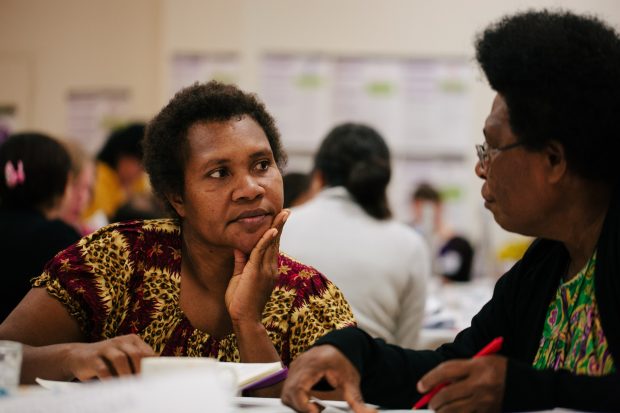 Communities in East Pomio, Papua New Guinea have historically drawn their strength from making important decisions together. As a matrilineal society, women’s voices must be central in those crucial discussions. Across East Pomio, women are traditional land owners, and tenure is passed down from generation to generation via the women. Land here is the primary source of livelihoods, and communities’ physical, social and cultural wellbeing. But it’s also a prime target for developers wanting to capitalise on the fertile earth.

Despite their important roles in their communities, women are not always consulted on the development or sale of their land. Wide Bay Conservation Association are a local organisation we partner with who want to make sure women are present and heard in conversations about how land is used and by whom.

As a rural organisation, they face a unique set of challenges in educating their communities about women’s important role in decision making. Here are some of the hurdles Wide Bay overcome every day to support women to be involved in what happens to their land.

East Pomio is geographically isolated, and travel from Wide Bay Conservation Association’s office in the Provincial capital to the villages where they work can mean a full day of rough sea travel. Climate change has meant that seasons are now even more unpredictable, and travel during certain times ranges from dangerous to impossible.

Coordinating workshops involving community leaders within a short timeframe can be a logistical nightmare wherever you are. But the Wide Bay area has no internet, infrequent access to electricity, and poor mobile phone reception across the board. Some people live several days walk away from workshop sites. When trying to bring people together to discuss sensitive or uncomfortable issues, this is an additional burden.

Development means money, and local governments and community leaders can have a vested interest in seeing land being developed. In addition to their work with women’s organisations and village-level associations, Wide Bay Conservation Association also work with Ward Governments and the East Pomio Local Level Government. They’ve had a historical influence in helping 15 Ward Government Plans gender sensitive.

Despite their ancestral and legal rights as land owners, over recent decades, women have been increasingly excluded from conversations about their lands. Formal positions of leadership are mostly held by men, and many do not recognise women’s rights to be included in talks about land use. Wide Bay Conservation Association work with communities to emphasise the importance of women’s voices in decision-making processes as custodians of the land, and as part of ensuring the stability of communities through reaching proper, inclusive consensus on decisions that affect everyone.

For communities who want to pursue deals with developers, Wide Bay Conservation Association can be seen as the opposition. However, they aren’t anti-development – just bad development that damages communities and environments for generations to come through unfair deals, illegal land-grabs, and unethical practices. Wide Bay Conservation  want to make sure that communities make informed decisions about their land and futures, and that women are given their rightful place in these discussions. They support communities to negotiate fair deals that include the voices and opinions of women. Some of the communities have gone on to make deals with developers that benefit both the women and men in their communities. But nine have also refused plantations.

For Wide Bay Conservation Association, it’s all about women’s role in the choice. Despite the cultural, political and logistical barriers they face as a rural women’s organisation, they do amazing work to make sure women have a say in the future of their land.