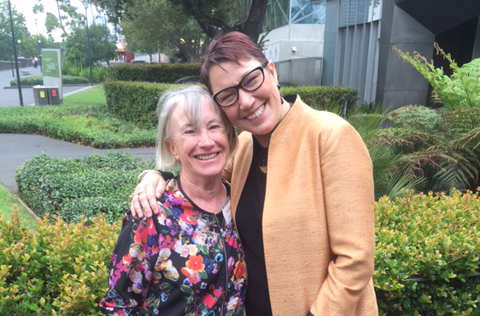 IWDA is pleased to share that our Chief Executive Officer Joanna Hayter has today been named to the Victorian Honour Roll of Women. Joanna is being recognised for outstanding service to international development, gender equality and peace building in a career that spans more than 30 years, 25 countries and four continents. The below is an extract from the inductee booklet produced by the Honour Roll.

From humble beginnings as a disarmament activist, to advisory roles to our government’s positioning at the UN Security Council, Joanna has become an influential figure in the women’s rights, peace and security movements. Joanna is well-respected for her contribution to and leadership in Australian international development. Notably, her dedicated work in the international women’s rights movement has brought about transformational change in the Asia-Pacific region.

Joanna’s indelible contribution and commitment to international development, led to her current position as CEO of the International Women’s Development Agency (IWDA) – the leading Australian development agency for women’s rights and gender equality.

Under Joanna’s leadership, IWDA has experienced a significant period of growth – the organisation has expanded its partnerships across the region and established itself as a gender equality thought leader. Joanna is a key political strategist in the Australian international development community and perhaps one of her most significant contributions is her influence on policy and decision-makers to confront gender blindness in aid programming.

Before taking up her position with IWDA, Joanna undertook a number of highly-regarded international roles as a resident Country Director in Myanmar (Burma) and Vietnam and the Regional Director for an international NGO in Africa. Alongside these endeavours, she has also managed her own development consulting business for clients – including not-for-profit development organisations and multiple United Nations agencies.

Throughout her long and diverse career Joanna has acted as a mentor to generations of women working in international development and human rights in both Australia and overseas. As her roles have grown more senior Joanna has continued to drive and facilitate collaborations in Australia and overseas to strength civil society responses to sustainable development, human security and social justice.

In 2013 Joanna was named one of Australia’s ‘100 Women of Influence’. This accolade is testament to her enduring commitment to the field of international development.

Congratulations Joanna on this well-deserved recognition!