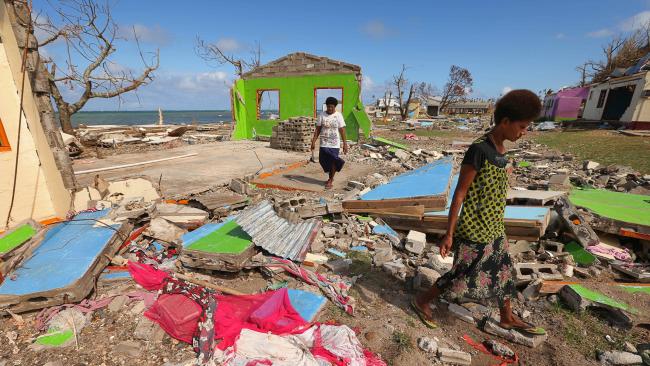 Women walk among the destroyed homes in the wake of Cyclone Winston in Fiji. Photo: Lyndon Mechielsen/The Australian

Climate change is not gender neutral. If you’re a woman, you’re more likely to feel the negative consequences of natural disasters and, left unchecked, climate change only stands to make gender inequalities worse.

In 63% of rural households worldwide, it’s a woman’s job to gather drinking water for their families. Climate change means more droughts and flooding, so finding access to clean water has become harder than ever. This puts added pressure on women and girls, with many having to travel longer and farther to access clean water. By travelling further from home and into the night, women are also more likely to be sexually assaulted by men.

2. Women’s health is in danger

In times of disaster, illnesses such as malaria and cholera can spread quickly, and water contamination is a serious concern. For women who are pregnant or giving birth in such unhygienic conditions, the risk to a mother and her baby is huge. And in the event her family gets sick, it is almost always the woman who is in charge of caring for them. This means she is unable to work, which further weakens her financial independence and deepens the cycle of poverty.

In some places, women do up to 80% of the farming work, with agriculture often being one of the few income sources available to women. This means that in the event of natural disasters, women face not only water shortages and loss of land to farm, but a loss of the income they rely on to survive.

During natural disasters, men are more likely to perpetrate violence against women.  This is particularly true for women or girls displaced or living in temporary accommodation, where there is a far greater risk of rape and physical violence. Worse still, with police and medical services overwhelmed during times of disaster, women may have nowhere to go to seek support.

5. It’s even harder for single or LGBTQI women to access emergency services

If women are already discriminated against in their communities, access to emergency services during natural disasters can be incredibly difficult. During the recent Cyclone Winston in Fiji, women of diverse sexual identities were choosing to stay in homes that were hazardous and remote – because they felt the evacuation centres were unsafe and unwelcoming for them. Those with healthcare issues were unable to reach doctors, and for poor households food, water and housing security immediately dropped.

If you’re interested in finding out more about how climate change and natural disasters affect women, here are a couple of places to explore: