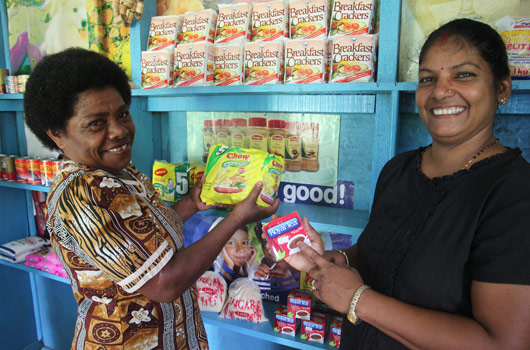 ‘The time we started [the group in 2006] we were just rural ladies looking after the kids and cooking etc… They were domestic duties women–they wanted to help their families. They wanted income generation to send the children to school. The main purpose was income generation.’

Vunicuicui is a rural area in the Macuata Province, approximately fifteen kilometres outside the township of Labasa in the Northern Division of Fiji, and one of four rural communities where IWDA’s partner Pacific Centre for Peacebuilding (PCP) facilitate their project ‘Supporting women and young people to build sustainable livelihoods in multi-ethnic communities in Fiji’. The goal of the project is to improve relationships across cultures, empower women’s voices and increase women’s participation in decision making, and so strengthen community security, economic security and food security within rural communities in the North.

The PCP staff work with existing women’s groups to analyse, articulate and prioritise women’s needs, and identify possible solutions based on their existing resources and capacities in order to increase their livelihood asset base. The ‘Vunicuicui Multiracial Women’s Forum Cooperative Dairy Shop’ is an initiative implemented by the Vunicuicui Multiracial Women’s Forum through the PCP project. Interestingly, Nirmala explains that the cooperative store was not implemented simply as a mechanism to generate income, but to help meet the practical needs of the women in the group and their community. She explains:

‘Perhaps you saw that there are no shops in the area. When it rains the flood comes and you can’t go to the other side [of the river]. There is no proper transportation. So we thought of a co-op shop so it can help the community. We had our meeting and [the PCP staff] went through ‘what do you want?’ We discussed everything, including the location. All the members agreed.’

The staff at PCP emphasise that it is the communities themselves that best understand their own needs, and therefore it is essential that communities are engaged in the design of the solutions that will meet their needs. A PCP North Project Manager explains:

‘The projects in each community were decided by each group of the women. It was developed after about three months of activities before they made [the] decision on what to do. We list the issues and then prioritise the issues by getting the women to vote. Economic security, food and health are the three [human security needs] that are always at the top of the list. From this, the women’s group then decide on the avenue or solution. [For example] the cooperative shop. They wanted to do a shop because it is something that they like doing – a shop or business – and it is something that is visible to the public.’

Vunicuicui is in an area of Fiji that is prone to regular flooding and cyclones. Nirmala explains that the poor condition of unsealed roads between the town of Labasa and rural communities is exacerbated in times of floods. During the wet season, buses stop running, so children have no way of travelling to school and the whole community can be cut off from town for long periods. Opening the cooperative not only introduced an income generating activity to the women’s group increasing their economic security, but also promotes food security in Vunicuicui during times of isolation due to flooding. By bringing the store to the community, these women are meeting the needs of many families, giving them access to many household staples such as soap, rice and cooking oil. The women led cooperative is increasing women’s access to and control over economic resources and services in their community.

Heavy rain and flooding not only spoils the roads, but also spoils crops. To address this, the women’s group has started a community seed bank, providing an additional avenue to increase the community’s food security. With the assistance of PCP, the women applied for a small grant to purchase materials needed to start the seed bank. An unintended benefit of the seed bank has been the introduction of a new species of taro to the seed bank, which has diversified the community’s diet, contributing to improved nutrition and health outcomes.

But what can be done about the other issues affecting these women’s livelihoods, such as poor road conditions, unreliable transportation and no electricity? Despite being equally negatively affected by issues such these, women from different ethnic groups in Fiji experience unequal opportunities and power, impacting on their ability to participate in decision making and influence change. A PCP North Project Manager:

‘It was eye opening for me that the Indo-Fijian women were not included in the decision making process… I wanted people to understand the structures and get access to the government.’

The Vunicuicui Multiracial Women’s Forum and PCP identified that traditional structures meant that although iTaukei (indigenous Fijian) women have a clear, socially-determined pathway and process for decision making, from village council to district level through to divisional level, Indo-Fijian women’s voices have no such pathway. Indo-Fijian women are unable to participate or contribute within this space, instead needing to channel their issues individually to advisory councils, which are comprised mostly of men. The Vunicuicui Multiracial Women’s Forum identified that if there were to be significant, real and sustainable changes to address development issues such as the poor road conditions and connection of electricity, women’s collective voices needed to be amplified to the Fijian government. Vunicuicui Multiracial Women’s Forum, with the assistance of PCP, decided to bypass traditional structures and claim a space in decision making by arranging a Community Dialogue, inviting government officials to openly discuss these issues with the community.

‘Now the road is a government road and, although it has been a long time, we have electricity on the way, you can see the posts. I think the dialogue was good, but now I still have to follow-up. We have to push them. For the electricity I am the spokesperson – usually it is a man, but [PCP staff] encouraged me to become the spokesperson because they [the men] have been trying for over 30 years with no change. [Working with PCP taught] us that we are not just for housework, but that we can do other things. We were frightened to enter any of the [government] offices; we thought these men were ‘big men’, not that they were just humans. We are very strong now. Now I go to most of the workshops. I can go anywhere – Nadir, Suva… I have been to Australia for a leadership course.’ – Nirmala Shama

Although it has been an ongoing process over some four years of PCP working alongside the women of Vunicuicui, one of the most significant changes has been in the confidence that has been built in individual women participating in the forum.

Many of the women involved in the PCP project recall stories about how they had been frightened to talk to anyone – even their female neighbours. Now they tell of how the project has empowered them and the ripple effects of this transformative change in the community, such as being elected as community representatives to lobby the government to connect electricity.

‘Thank you to [PCP] to empower us to be good women. I want to be like [the leaders of PCP] one day. I am a good leader, but I want to go up. One day in the future I want to be a Member of Parliament. Not for the community, but for Fiji. First, I must be a good leader for my multiracial group.’