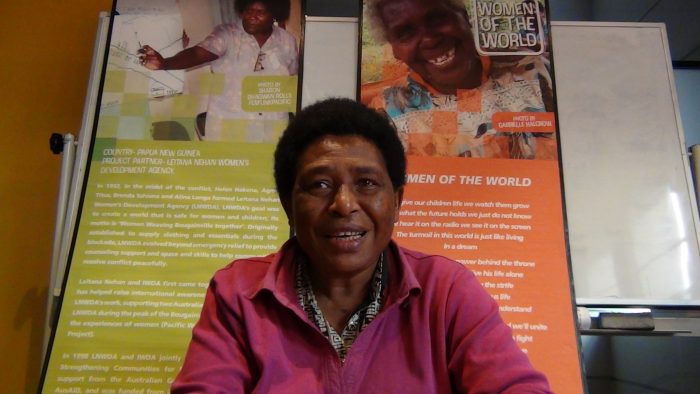 “Women have become just observers, not participants. We have been kept silent for too long.”

These are the words of Elizabeth Tongne, Director of Wide Bay Conservation Association (WBCA) in Papua New Guinea (PNG). She says that women in PNG feel that they do not have any say in decision-making over community land and resources.

After graduating as a teacher, Elizabeth spent eight years working in education in the East New Britain province. There, she and other community members realised the enormous importance of land control and resource development.

In some parts of PNG land is customarily passed down through generations via women. This traditional custodianship, Elizabeth says, was about building relationships and revolved around basic things like making sure everyone had enough to eat and somewhere to sleep.

“It was all about common sense. Over the years though, it has gone from communal development of the land (where we all got what we needed from developing the land ourselves) to economic development (where everything now has a dollar value),” she says.

Land and natural resources are in high demand by developers in PNG, especially for palm oil production.

WBCA encourages communities to see how they can utilise their land as an alternative to selling it to developers. Or if selling is what they decide, WBCA supports women and communities to have a say about how their land is developed.

“We help facilitate communities so that they are able to participate in making informed decisions. Women as clan members wanted a voice on how our land and resources were being developed. It’s taken a long time for women to realise that making decisions about land resources is very important. It has been and still is a struggle,” says Elizabeth.

With funding from IWDA, WBCA started conducting workshops with tribes and consultations with elders and leaders. In the workshops and consultations, participants are challenged about how society sees women as decision-makers and land owners and how this perception has changed over time.

“Most importantly, we encourage and assist women to take a stand and find space to speak out against things that affect their community,” she says.

After commercial development of community land has occurred, Elizabeth says there are often increased amounts of domestic violence; decreased food security; lack of social security for women and children; and drug and alcohol abuse is more prevalent.

Elizabeth says that the future sees WBCA being more involved with East Pomio communities after this development has taken place.

“How do women put food on the table and pay school fees when men have sold their land to plantations that give the highest paying jobs to men who do not invest it in their families?

“If these women are not protected and supported then what will they do and where will they go? We will soon be more involved in communities so people can best accommodate these changes,” she says.

WBCA has been focussing on building relationships with local government and other relevant organisations so they can all work together to promote gender participation.